In the novel, Waiting for the barbarians by J.M Coetzee, the barbarians are the Easterners of orientalism and the Magistrate’s empire are the Westerners. The Magistrate did not see the barbarian girl’s home as a civil society and tried to save her from the barbarians civilization. In Said’s book of The Orientalist, he describes how the Western side of the globe views the Eastern side as uncivilized or savages, which is how Coetzee’s characters view the barbarians. Middle Easterns are civilized people and have their own traditions that may differ from that of a European, but who has the right to decided who is better than the other.

This reminds me of a recent incident that I read on the news. Where an American missionary paid a fisherman to give him a lift to the very restricted island in the Bay Bengal. His goal was to educate the isolated Sentinelese tribe on Christianity, which was a very idiotic move. Mostly because this tribe kills anyone that goes near the island and the tribe did not need to learn the ways of the Christian religion. This news relates to Coetzee’s novel because the Magistrate tried to take in the barbarian girl, even though she did not need his help and only wanted to return to his people. In some situations helping others is useful, but you can’t rush evolution because civilizations have to adjust to the times. Some third world counties are still in the industrialization stage and they are not uncivilized, but progressing on their own. 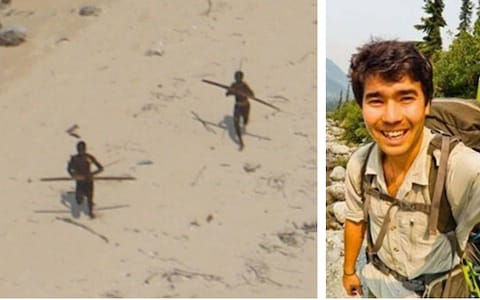 The American Missionary on the right and Sentinelese tribe members on the left.

In my anthropology class, I learned one of the theories in sociocultural evolution where each civilization is evolving on their own time and will soon all be at the same level of technology. Therefore, no one can assume that a civilization is primitive or not because they are progressing at their own rate.

What does one think when they hear the work savages or barbarians? I think of murders, but in Waiting for the Barbarians it is used to describe foreigners because the novel is anti-representation and never mentions a specific time period of location. The fact that they are using a nasty term such as, barbarians, to describe people that do not have the same customs as them is judgmental and discriminatory. The word barbarian has changed over time, in the Roman time the Romans adopted the word to describe anyone that is not apart of the Roman Empire. They were excluding all other culture and traditions and placing their civilization over others. This reminds me of Hitler during World War two because he tried to place the Aryan race over all other races and ignored all other tradition. Hitler committed Jew genocide and tried to make Christianity as the only religion on earth when the world has thousands of beliefs that anyone can follow. I believe each nation should be left to mind their own business and others should only interfere if they are causing harm to other nations or are asking for help.

‘You guys might think I’m crazy’: US missionary killed by tribe on remote island

Waiting for the Barbarians by J.M Coetzee